I can't believe I have an almost 2 year old! Abigail is getting so big and doing the funniest things. She acts like she is sleeping when we are trying to get her to do something. She throws fits/tantrums when she wants her way (which is REALLY fun to deal with, let me tell you). She still LOVES me to death and wants me to carry her all the time. . .Little Brother Ty has been balancing his sis on his head for months now. . .hope he doesn't mind. :) Abigail is getting better and better with her alphabet too. It amazes me how quickly she learns something. She is saying more words all the time. . .chips (which she loves), a bite (when she wants to eat something we have), shoe shoes (for shoes or socks), bow (which we look for all the time cuz she pulls it out of her hair), all the Sesame Street character's names, all of her aunts and uncle's names. . .swimmin. . .the list could go on. :)
Last weekend my parents celebrated their 40th wedding anniversary so we went out to the "Lake House" aka-the house my dad grew up in, to celebrate. It was a HOOOT day but we had so much fun. I love watching the little cousins play together. Abby just laughs and laughs at Griffin and Sophia. Griffin and Abs are so close in age and size--they look so cute when they are next to each other. Look how beautiful it is out there! 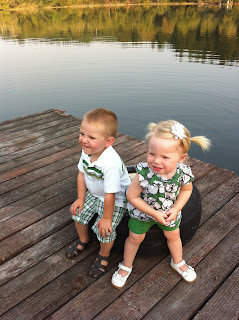 A little photo shoot w/ all the cousins (as of right now) :) Abigail, Sophia, Don and Griffin. Marisa and Amy have better shots that they will hopefully post soon too. 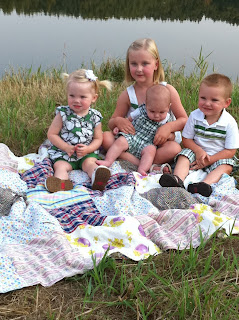 I thought this was a hilarious pic of the kids on a hot summer day. I think babes in their diaps is so dang cute that I let Abs run around like that for most of the day. It was great because she didn't stain any of her clothes from eating (without her bib which she refuses to wear). They had all just enjoyed some cake so are now drinking a little milk to wash it down with. 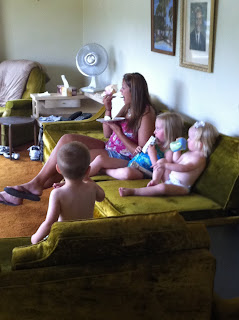 I wonder why Abigail never wants to sit in her high chair at restaurants??? Hmmmn, maybe I shouldn't just let her eat wherever she wants at home. oops 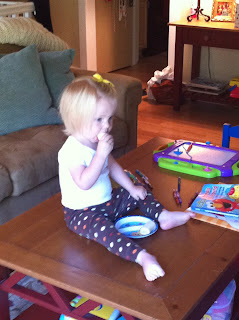 She eats so well and such big girl meals now! Subway kids meals are my fave for her. I get her a sammi and de-construct it so she gets olives, tomatoes, cheese, meat, bread and chips. A little bit of everything--she loves it! 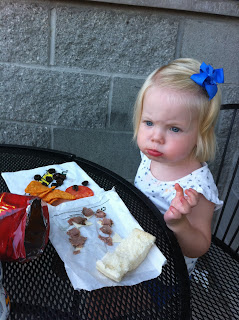 Here we are at the first Husky tailgate of the season w/ Daddy. . .we have to go to at least one. She did great and zonked out on the walk back to the car. It was another hot day! 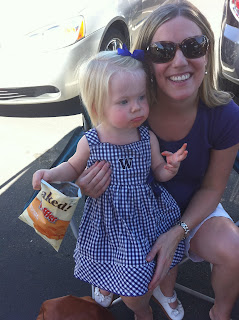 A fun Labor Day BBQ at Mike and Molly's--Abby enjoyed a little hammock swing from Daddy while we were there. She loves going to their house and acts like she owns the place, just walking around and doing whatever she wants. I love that she is so comfortable there because Zach and I love it there too! :) 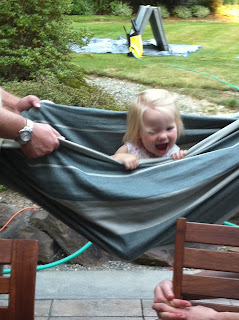 Ummm, sometimes Abby thinks she is smaller than she is. She likes to try to sit on her toys--her small toys like this little Sesame Street train. She has also tried sitting in a Barbie chair and on a plastic horse figurine. Makes Z and I crack up every time. . .she probably does it just because we do laugh so much. 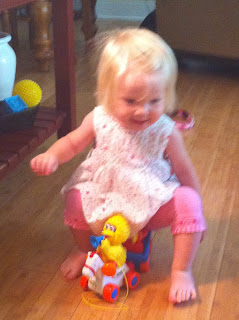 Ahhh, my little buddy. . .before you know it she will be 2 and her little brother will be here! Kind of scary to think about but I am so excited to meet him and see how they interact together. I really hope they are the best of friends like I am with my siblings.

My three hour glucose test came back A-Okay so everything is going well with the pregnancy. I am definitely starting to feel like the end is near--uncomfortable and achy much more and feeling CRAZY movements ALL. THE. TIME. We still haven't done anything to get Ty's room ready but hopefully we'll work on it this weekend. Sooo hard for Z to focus on anything aside from football on the weekends now though so I might have to have a tantrum like Abs to get him to start moving furniture. . .since obviously I can't do it alone. :)

Posted by Kimberly at 1:18 PM 2 comments