HA--kidding, I've gained one pound since my last doctor's appointment a month ago. . .really gettin big! Baby is growing but they have changed our due date to Dec. 10th instead of Dec. 3rd. I feel better than I did during my 2nd month but have been getting horrible headaches mostly in the evening as well as some puking after I eat dinner--Lovely! 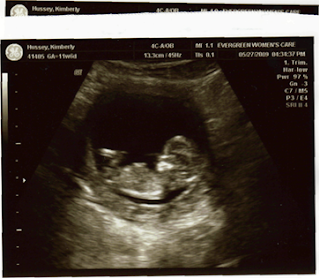 So Joe had his last high school baseball game last Thursday in Puyallup. North Thurston was in the playoffs so it was a big game. Great news--Joe hit a home run!!! But, that is not where the story stops. Later in the game when his team was up to bat he knew he wasn't close in the line up to be up for awhile and he really needed to go the bathroom. . .he had a horrible stomach ache if you know what I mean. I guess the bathrooms were very far away so he takes a stroll out there, the first batter gets up--strikes out, second batter-OUT, third batter-OUT. .. time for NT to take the field. Joe was playing right field but was still in the bathroom thinking his team was up to bat still. Everyone is out practicing not noticing that Joe has not returned. Finally, the inning is about to start and someone realizes the right fielder is not out there. The ump yells out "Hey, where's your right fielder" where someone responded with "I think he's in the can". :) Everyone laughed and the ump was joking saying maybe I should penalize the team for delay of game etc. etc. Finally Joe finishes up, walks out of the bathroom and realizes his team is out in the field and started bookin it back. When he got back to the field everyone started clapping, even the other players and fans. Fortunately, Joe does not get embarrassed at all about things like this so he just laughed and took his position. NT ended up losing the game by one run but who wouldn't want to end their high school career with a home run and cause for delay of game because you're pooping! HA

Posted by Kimberly at 9:51 AM 2 comments

If you'd like to check out pictures from our wedding go to: www.definingdetails.com/clients
Your password is: pike place
There are a ton of pics so if you prefer a quick run through click below on the slideshow--it's awesome and brings tears to my eyes each time I watch it.

Thanks again Shannon for taking such wonderful pictures. I am almost done flagging my faves and will send you some numbers shortly. I just love them all. :)

I thought since my 33rd birthday is tomorrow I'd reflect back on year 32. . .

So what will 33 bring me? :) I think some kitties and a baby for sure! I am so blessed to have such a wonderful loving family and friends and the best husband ever--you all helped make 32 such an exciting year. thank you- I love you!