So I'm watching The Bachelor on Monday night and Zach is sitting in the same room. . .it gets to the scenes for next week's finale. . . To preface this, for the entire season I've thought it was weird that Jason's last name was Mesnick and I went on a few dates with a guy my freshman year of college with that last name. . .the scenes for next week show Jason's brothers and I instantly realize one of his brother's was the guy I dated! HA--AND to make it even more funny, Zach recognized him too and realized he was in his fraternity. I went to a dance in 95' with the guy and Zach most likely was there too. Small world. Kora and I even went on a double date once with Shawn and Larry, Jason's brothers. Of course, Zach was mad that I didn't remember being at a Delts dance in 95'--hello, that was forever ago, how I am supposed to rememeber that was the fraternity?!?! Anyways, thought I'd share my little claim to fame. hee hee I wish I could scan the pic of me from that dance--my hair was pretty huge. . .and I slipped and fell at the restaurant that night--with my dress on. Awesome.

When I moved into the Woodinville house I immediatly put my "kid" hat on and got so excited for 1. the fact that our kitchen has two openings--I thought how much fun will it be for our kids to ride their hotwheels in circles through the house (we totally did that when we were little) and 2. we have this great corner cupboard with no lazy susan so it could make for a really fun fort someday. . .

Kyle, Amy and Sophia came to visit this past weekend and I got to try the fort out--Sophes loved it. . .not so sure Zach is too keen on the things I think I am going to allow our children to do someday. . .I say--lighten up! :) Amy told me that Auntie Kim has the best fort but Auntie Kora has the best Easy-Bake Oven--check it out. . .I think Kora needs to start selling those things. HA 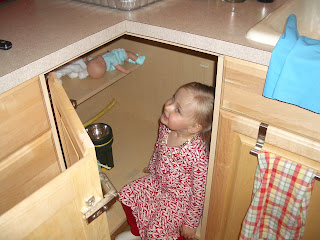 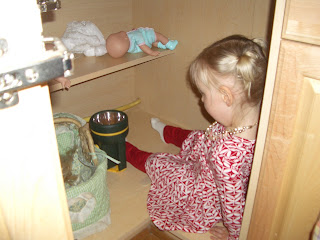 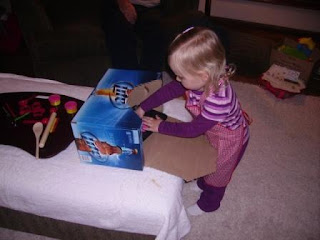 Posted by Kimberly at 2:19 PM 1 comments

As of yesterday, 2 months to go til the big day! We met with the coordinator at Sodo Park last week so I'm feeling pretty good about the plan for that day. I will admit that I'm not in love with her as she is not the most responsive person and doesn't sell the venue at all but I do LOVE the place so I'm trying not to think too much about how frustrated I could be getting. . .thank goodness I plan things like this for a living so I know what to do and what to ask. I practically ran the meeting last week. On Sunday I met with Megan, who is doing our invites so those are pretty good to go. I just need to decide how I want my RSVP cards to be worded and then we can hit "Print". Zach and I finally registered but it was hard so we don't have anywhere near the amount of items the people tell you to register for but oh well. My dress is supposed to ship on Feb. 12th so should be here the week after--I can't wait to try it on in my size!!! I haven't been stressed at all with the planning but am starting to feel it a bit now that we are so close and have to meet with people and make final decisions but it is all fun stuff and so exciting.